Yesterday morning I was fast asleep, when when I was awakened by the sound of "Jacki, Jacki! Today is the Winter Extravaganza!! Wake up!"

I opened my eyes to see John peering down at me. "Huh?" I said in my groggy state.

"Extravaganza! We're having an extravaganza today!"

So I rolled out of bed to find out what he was talking about.

One of the things I love about John is that he is a planner. I can just lay back and relax and he'll make sure we have lots of fun things to do. On this particular Saturday as it turns out, he had thought of so many fun things to do that he decided it was worthy of a dramatic title and that is how the Winter Extravaganza came to be.

Originally the plan was to go skating, see Avatar in Imax 3D, go for Korean barbecue and then watch the fireworks/laser show downtown. Definitely a full day! But I had fruit cakes to make! So we decided to cut out the movie and leave the house a little bit later.

I got to work making the pineapple Christmas cake. It only takes a few minutes to throw together but it takes almost two hours to bake, so we had time for a leisurely breakfast of egg sandwiches and an episode of One Tree Hill before it was time to go.

Since we were going downtown anyway, I really wanted to see what the crowds at the Eaton Centre look like on the last shopping weekend before Christmas, so we got off at Dundas station on our way to the rink (the mall is so big it hits two subway stations!), check out the crowd: 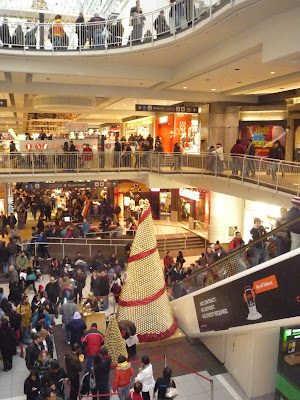 I love it! And there's something Zen-like in the feeling you get watching other people scurrying around to get their last minute shopping done, when you've already finished all of your shopping weeks ago. The Christmas tree you see there is for Ferrero Rocher, and the small tree in front of it was made entirely out of the little chocolates.

Then, just for you Aunt Debbie, I made sure we got some shots of the Swarovski tree! Here it is from far away so you can see how big it is. 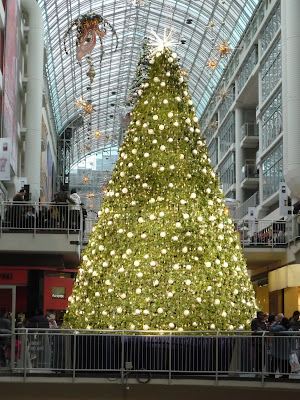 Mom, you'll be happy to know that it spins. I'm afraid we weren't able to capture the sparkle of it but here is a picture to show you how densly packed the crystal ornaments are on this massive tree. 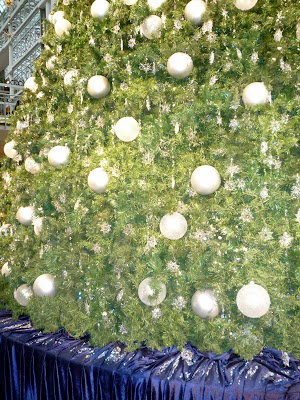 and here is a close up of the ornaments. They were all snowflakes (my favorite!) or long crystal drops. All in all there must have been thousands of crystal ornaments on the tree! 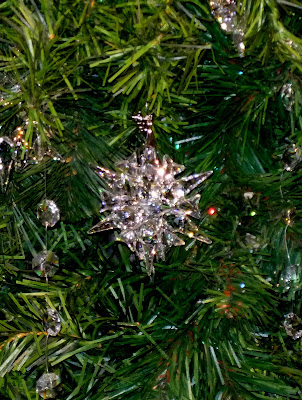 From the mall, we headed down to City Hall where there is a free skating rink! Anyone can go and it doesn't cost anything, but if you need a skate rental like we did, it's $9 each. We waited in a long, chilly line for our skates and then found a spot to sit down and put them on. Here they are, getting the rink ready for us: 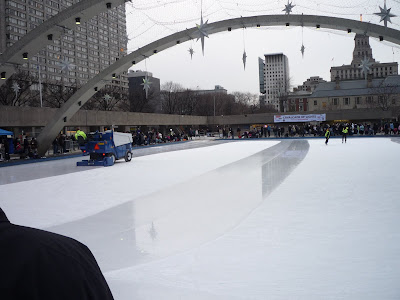 And here it is full of people: 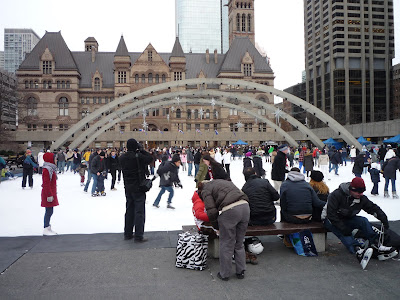 Once we got our skates on and got onto the ice, I was amused to find out that for once I was better at something than John! At first he wobbled around on his skates but after a few trips around the rink he was picking up speed and looking more stable! I don't think I've been skating since high school so I was pretty happy to find out that I still remember how to do it. It was a lot of fun and it was a great way to warm up!

From there we headed to the Korean grill on Queen Street W. It was absolutely packed, so we took that as a good sign!

It's an all you can eat place with a grill in the center of each table. For about $16 per person, you get all you can eat chicken, pork, ribs, chinese sausage (yum!), beef, white fish fillet, salmon, squid, ox tongue (!!!), another organ meat that I can't remember and veggies including cucumber, lettuce, green pepper, onion and pineapple. Plus you get an assortment of appetizers (sesame bean sprouts, daikon radish pickles, some kind of bean salad, spicy fried tofu and kimchi), soup, rice and tea. And you fry it all at the table! Check out the spread: 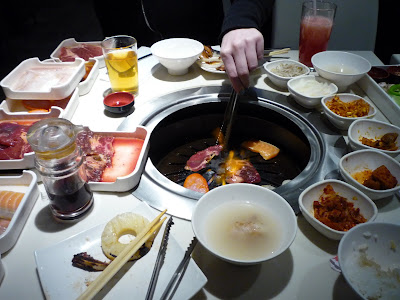 I have always wanted to try Korean barbecue, and I was not disappointed! I had lots of fun cooking my food at the table. My favorites were the beef and the barbecue sausage. I wasn't brave enough to try the organs, and my attempt at cooking the fish was pretty terrible (I over cooked it so it all fell apart and into the grill, lol) but I did manage to grill up some yummy pineapple and onion slices. John was much better than me at it, I think because he is the one that does all of the barbecuing.

You could tell that the restaurant pays attention to details. The portion sizes were almost the perfect amount that we almost finished everything and didn't have to ask for anything extra. The tea was smooth and not at all bitter (a pet peeve of mine in Asian restaurants), they used chicken thigh meat instead of breast meat so that it wouldn't dry out on the grill and I had a glass of fresh watermelon juice that was to die for! It seriously tasted like summer in a glass (very welcome on Winter Extravaganza day!). I need to learn how to make it!

We were done much earlier than expected, still hours away from the fireworks, so we decided to try and squeeze in a movie after all. We headed to the Scotiabank theatre for the Imax and I waited in the lobby while John went to get us tickets. After about ten minutes of waiting in line, he came and found me to tell me that when he asked for the tickets the woman at the counter actually laughed at him. Apparently they are sold out until Monday. Who knew it would be that popular?

At that point we were pretty chilly, and the fireworks were still a while away, so I was starting to feel Winter Extravaganza'd out. We decided to call it quits and hopped on Subway to head back home, stopping only for some Starbucks peppermint mochas along the way. When we got home, we curled up on the couch for a bit with hot drinks to warm up. It was still early so I baked a few more fruitcakes (this time Nana's recipe) and we stayed up to watch SNL.

All in all, I had a wonderful day. It was my first day to really enjoy the winter side of Toronto and I had a great time and a great person to spend it with!
Posted by Jacki at 8:34 PM