Today was orientation! I took the day off work and headed down to the Guvernment Koolhaus to meet my new peers. Although it felt ridiculously early to have to be somewhere by 9:30 (normally I work at noon), I had to remind myself that this was two hours later than when class starts next week.

When I walked up to the building, there was already a line of people slowly working their way past people from various organizations throughout the college giving away pamphlets, flyers and swag. Inside the building, despite the early hour, the lights were dim and the music was pumping. I believe there were close to a thousand people inside! And we were all wearing ridiculous matching mustard-coloured t-shirts. It was the whole chef school and hospitality school, probably 15 or 20 different programs. We worked our way through the first two rooms, visiting kiosks along the way filled with people looking to recruit for sports teams, telling us where to get our lockers or offering support to international students.

In the third room, we were seated with people from our specific program. I was relieved to find that I didn't feel or look that much older than the people at my table. I think I'm going to fit in okay! And my program is almost entirely girls! I think there are at most 10 guys in a program with 150 students.

So we sat through some speeches. I got to put some faces to the names of people I dealt with last year in my battle to get into the program. After the speeches, they gave us an activity to get to know the people at our tables. We were given an apple, an orange, two bananas, a plate, a bowl, a pipe cleaner, some toothpicks, a napkin and two paring knives and were told to make a presentation of the fruit. I contributed to my group's display by making checkerboards on the on the apple wedges.

There was some judging, and then we all left the club to head back to the school for our program orientations. As we walked back, I watched the sea of hundreds of yellow t-shirts as they crossed the Gardiner Expressway and just laughed. It was pretty ridiculous.

At school, we were herded into classrooms specific to our program where we found brown bag lunches. I had an egg sandwich, it was exactly what I needed.

The next hour was spent listening to a power point presentation of the school rules. My worst nightmares were confirmed: No jewelry, no nail polish, no ponytails.

Somehow, I will survive.

I think most of the programs did a tour after their sessions, but ours didn't, so we were free after that.

First I tracked down my locker. My suspicions when reserving my locker online were correct. The odd numbers meant it was a top locker. Excellent.

Then I tracked down a women who is helping me with my math exemption (there was a bit of mix-up where I was told it was confirmed, but it was not confirmed at all, so I've been trying to get everything fixed up this week). I gave her the form and she was optimistic that I will be exempted from the class, and told me not to register for it.

Then I went to the bookstore to pick up my last few things. As expected, it was an absolute zoo. The bookstore wasn't big enough for all the action so they had set up a stations in the hall for trying on uniforms, buying knives and buying linens. Each station had a huge lineup. I was happy I took care of all that last week. My favorite part was that Mark's Work Warehouse had set up a big truck outside the bookstore where you could walk into the back and there were chairs inside so you could try on safety shoes. Inside the bookstore, the line wrapped all the way around the perimeter of the store and out into the hall. I had lots of time though, so I picked up my shoes, the notes for the math class (Even if I'm not taking it, for $12 I figured it wouldn't hurt to flip through the course notes), and the info I need to do my sanitation course online.

By this time it was only 1pm, so I decided to go sit in another long line and get my student loan stuff sorted. I was really surprised at how easy the process was, no wonder college kids get so far into debt! I won't actually get my loan for about a month though because I opted out of the direct deposit option. I don't trust the government with my bank account number! The loan people thought I was crazy though. They kept trying to convince me that it's perfectly safe. I mean, they really tried. Regardless of whether I agree with them though, I just think it's such a minor inconvenience to wait a few weeks that it's totally worth saving that little bit of my privacy.

After that, I decided to head home because I had a headache. I learned something about myself today. I'm officially addicted to caffeine. I didn't have my regular noon cup of green tea, and from twelve o'clock onwards, I started feeling worse and worse. So I came home, made a cup of tea and started blogging!


Okay, so I'm sure you're wondering....What kind of stuff do you need for pastry school?

Well, I just happen to have finish collecting all of my supplies, so I would be happy to show you!

Of course I need textbooks, course notes, notebooks, pens and an adorable netbook. 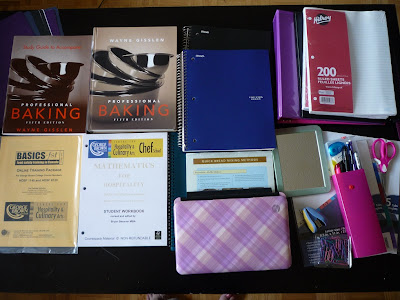 The textbook looks amazing, plus it came with little flashcard/cheat sheet dealies that contain all the mixing instructions for the main things I will be baking. The idea is that if you give me a list of ingredients to make say, bread, I can find the corresponding flashcard and it will tell me exactly how to combine those ingredients to get the result that I want. Nifty!

But what am I going to wear???

I got three fresh uniforms, complete with pants, jacket, neckerchief, bar towel, hat and apron. Yes, I'm really going to wear those hats. And I got a cute pink laundry bag to haul my dirty uniforms home at the end of the week. It wasn't until after I got it home that I realized it matches my netbook. John just laughs when that happens.

I got another bag to hold my school books. It's a Targus bag, so it's really nice and it was on sale which is also really nice. My safety shoes are not particularly cute, but apparently they have steel toes and are slip resistant, specially suited for those in the hospitality industry. 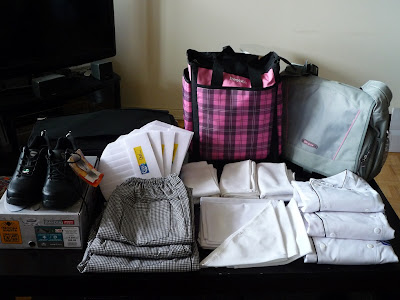 I know what you're thinking. "But Jacki, what's in that black case tucked back there in the corner?"

My baking tools! The case opens up like a book. On page one we have wooden spoons, spatulas and yes, that is a paint brush. The only use I can think of for it is maybe to brush crumbs off a cake? 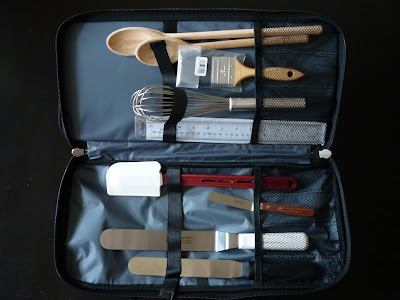 On page two, we have oven mitts, a sil-pat sheet (used instead of parchment paper to line cookie sheets), a strainer, two piping bags (how will I ever survive with only two?!?!), a peeler and two sets of ten piping tips - just round tips and star tips in varying sizes. 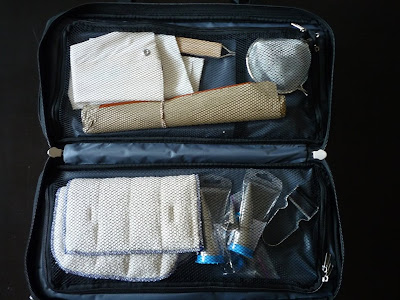 And on page three we find the fun/sharp stuff. Two ice cream scoops (have been jonesing for these for ages), a microplane grater (been jonesing for that one too), some heavy duty scissors and some knives. One of them is bigger than anything I have at home! 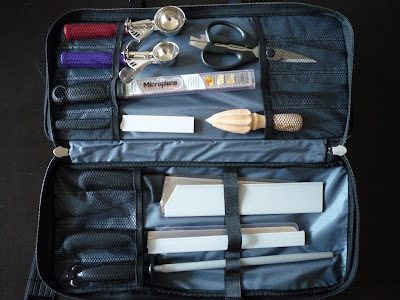 And lastly, in the outside pockets, we find a scraper, a decorative edger, a smooth edger and some kind of probe that sits outside of the oven, but the stick part goes in the oven, into the food and continuously monitors the temperature. 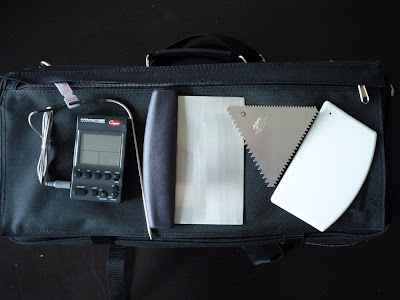 Apparently this is all I will need to bake all manners of wonderful desserts!

So in conclusion, I am going to have three really heavy bags to lug in everyday. If I come out of this program with nothing else, it will be strong arms!
Posted by Jacki at 1:46 PM 3 comments: