We had an Earthquake!

I was at work and it was interesting to watch everyone realize what was happening at the same time. I couldn't feel the earth tremble, I just felt the building sway from side to side. It's two hours later and I still have a funny feeling in my stomach.

Some people went home from work citing being too shaken up to continue, but I think it's just because it was so unnerving. It wasn't bad enough for anything to fall off my desk, for example.

So I don't think we were in any real danger, but it was definitely spooky!
Posted by Jacki at 12:47 PM 2 comments:

It's only been a few days, but there have been some changes in my garden!

My sprouts are growing a bit better, but still not enough for a sandwich. 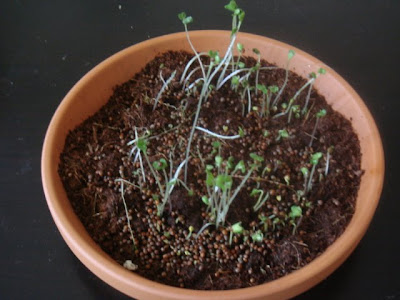 And that's not the only thing sprouting!

My green onions have started to sprout. They're so tiny, I think it's impossible that they'll every become vegetables. 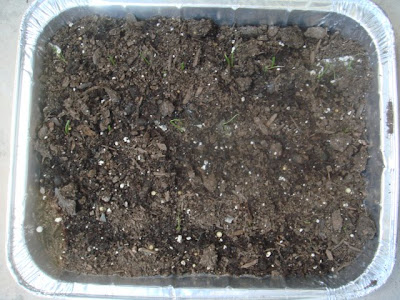 The green onions were actually the last ones to sprout out of everything I planted. The mesclun greens have tonnes of sprouts. I still have no idea what any of them are, but I can see subtle differences between them so I know I've got a few varieties growing. 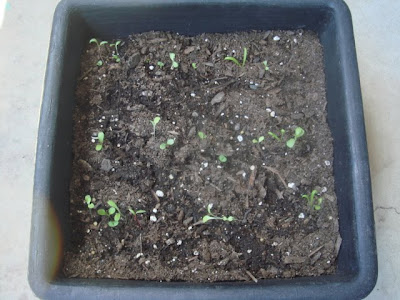 And check out the zucchinis! They got this big in just a week! 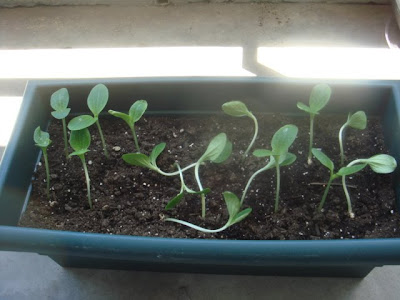 After they were already planted, I decided to do some research on them (backwards, I know) and it turns out that a single plant should be enough to keep us in zucchinis for the summer. So maybe planting 16 was a bit overkill. Apparently each plant produces a zucchini every two days. Yikes!

But to be honest, given my track record with seedlings, I'll be impressed if more than say, five make it to maturity. And worst case, I'll dig 'em up and give them away. Apparently you can eat the flowers too! You can chop them up and put them in frittata or use them to wrap soft cheese in and fry. This should be interesting!

Some of the plants have improved over the past week. My cactus is starting to get its colour back. It had turned a deep purple over the winter, but now it seems to be returning to its original pink colour. 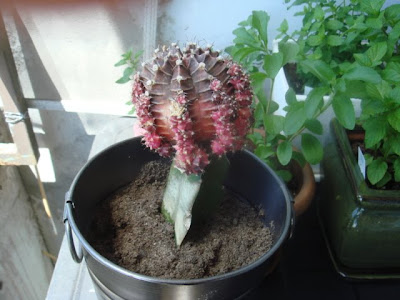 The banana tree has a couple of fresh new leaves. Those ratty old ones will be gone in no time. It's also weeping at night (drops of water drip from the tips of the leaves) so that tells me it's happy too. 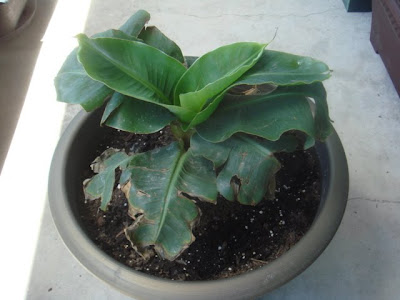 and one of the strawberries has started turning red! I can't wait until these are ready to eat. 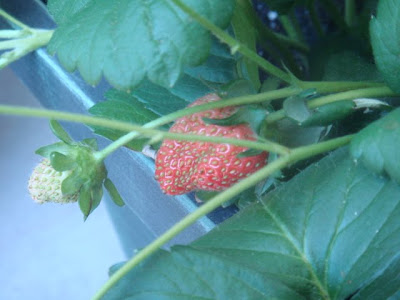 And we have new additions! Introducing..... 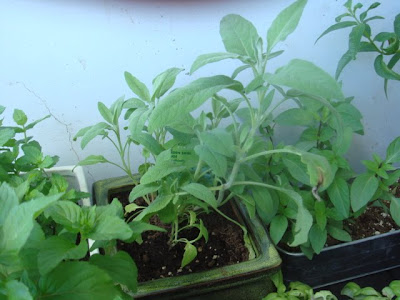 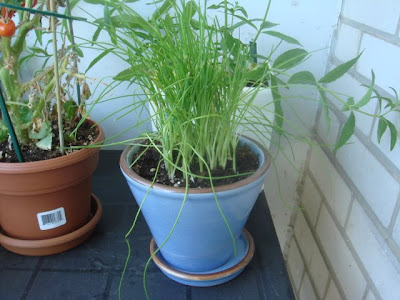 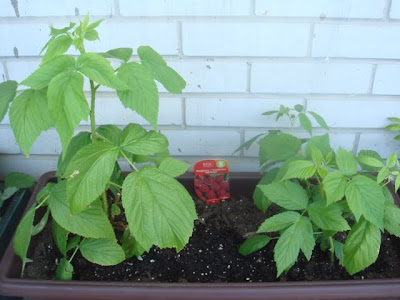 These plants were on sale at Canadian tire last weekend, so I bought two. I'm not sure how well they'll grow in a container, but I figure it's worth a shot!

They've already got the start of a few berries: 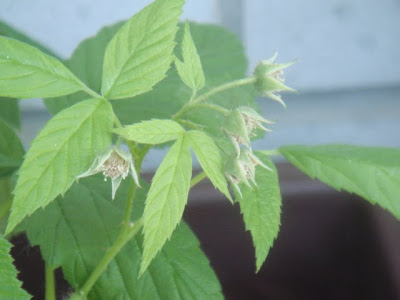 At the same sale I picked up two blueberry plants! 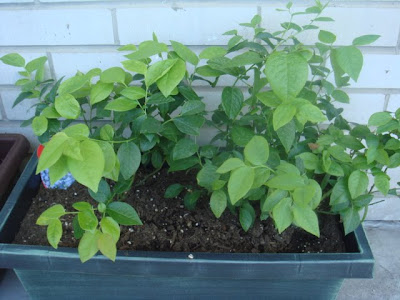 The little tag with them promises 1cm blueberries in late July.

And the plant I'm most excited about? Rhubarb! 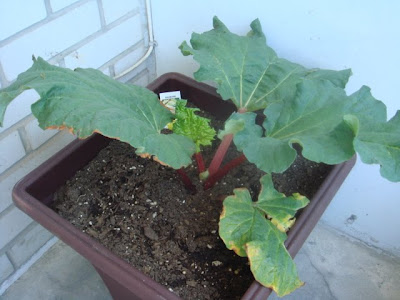 I found this at a fruit stand near our building when I was on my way to my bridesmaid's dress fitting. I was too excited to find it, rhubarb reminds me of home. I know they get bigger and stronger every year, so I gave it a pot big enough that it should have lots of room to grow its roots. I'm not expecting too much out of it this year, but hopefully I'll get at least enough for some strawberry-rhubarb sauce for vanilla ice cream.

And lastly, because I had some leftover dirt, I decided to try a little experiment. I took a couple of cloves of garlic from my fridge and buried them. I wonder if anything will grow? 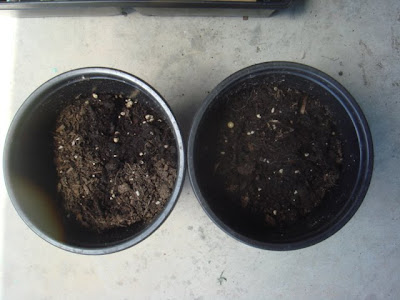 I'm really happy with my garden! With the exception of dill, I think I have all of the plants I want. Which is a good thing, because I'm running out of space! 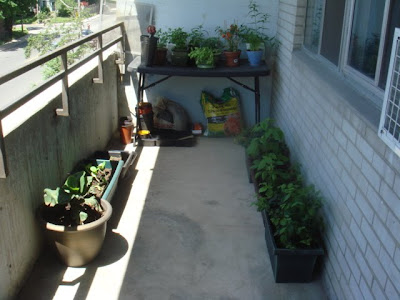 The next step is to make it a little cozier. I want to put down some bamboo mats and John wants to put out a chaise. Oh yeah, and here is his contribution this week to our improved summer lifestyle: 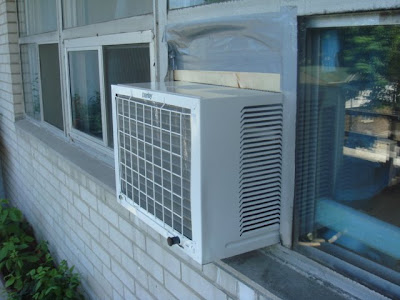 Definitely an improvement over last summer!

And since we're talking about gardens, I thought I'd share a picture of some other flowers I'm working on: 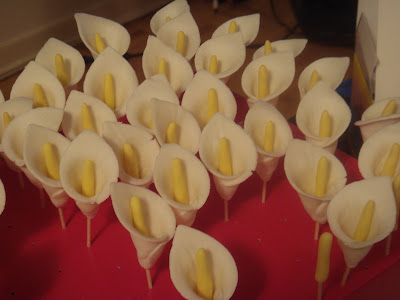