Recap + Our First Turkey Together

I haven't forgotten about you all!

I can't even tell you how much studying I have done this week. It's consumed my entire week. I get up at 7:00am, get ready for work, study until 8:30am and head to work. After work, I go straight to studying. Most nights I take an hour off to watch House or Glee or something, continue studying until 11:00pm, chill for half an hour and go to bed.

I'm not complaining. It's only for two weeks and I'm learning a lot so it's all good. But it does mean that I've had to drop a few of my fun things, one of which was blogging. But here I am at 9:30pm on a Sunday night and I'm finally done my studying for the weekend, so I thought it would be a good time to get caught up.

Last weekend was Thanksgiving and it was the first time I've ever hosted my own turkey dinner. My mom is pretty dependable when it comes to making Thanksgiving dinner, so I've never needed to do it myself.

Well, although I did miss spending Thanksgiving with my family at home, I think John and I made the best of what we have here. We put on an amazing spread and had a wonderful time with friends and our Ontario family.

John and I cooked all day. I made some turkey cupcakes first of all. Here's a picture of them: 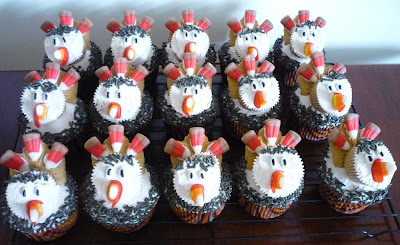 John actually found two kinds of candy corn for me, orange for the noses and red for the tails. The cupcakes themselves are root beer flavoured! I was so proud of them. I used a combination of root beer flavouring (you can buy it in little bottles, like vanilla) and actual root beer to get the flavour to come through.

I also made pumpkin squares. I don't like to make pies because I have no pastry skills and we were expecting too many people for a pie anyway (there were supposed to be eight of us), so I pulled out my 9" x 13" pan, started with a layer of oatmeal crumble (like the bottom of an apple crisp), topped it with pumpkin pie filling (canned pumpkin, evaporated milk and spices) and threw it in the oven.

John was in charge of the turkey. We got the biggest one we could find, it was 7.5 kg. He had all these secret turkey cooking tricks that I thought he was just making up, but the end result was the juiciest turkey I've ever tasted, so they must have done something!

I wanted stovetop stuffing, but he wanted to make his own so we compromised and made both (although the stovetop had to wait until hot turkey sandwiches the next day). I love any compromise that results in more food. He made a couscous dressing with onion, apple and cranberries. He thought it came out soggy (because couscous takes 5 minutes to cook, not 5 hours) but I thought it was perfect, I loved it.

For veggies we only made broccoli with cheese sauce. John has a no-cheese-whiz rule, so I did a roux-> cream sauce -> cheese sauce sort of thing. It turned out perfect. The secret is I used three cups of cheese to one cup of milk!

For starches we made a huge pot of mashed potatoes and John put together some whiskey sweet potatoes. I don't care for whiskey so I didn't expect to like them, but they were awesome. They were nice and sweet and didn't taste like whiskey at all.

Throw in a couple of cans of cranberry sauce and a couple of bottles of wine and you've got a meal!

Here is our beautiful turkey: 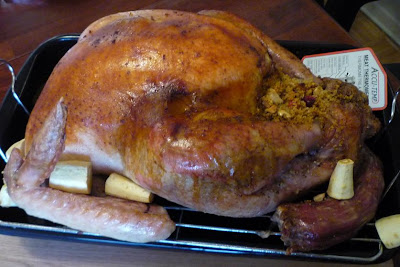 And here are John and Mark during the carving. I meant to take a picture of us all at the table with all of the food, but we were so hungry that we totally forgot! 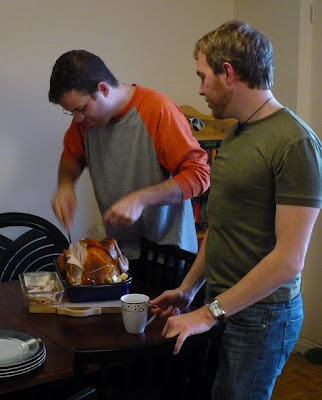 It was me, John, Mark (John's best friend), Mohammed (a friend of John's who just moved to Toronto from Halifax as well), and Judy and Allan (they stayed for the weekend with us). There was another couple that was supposed to join us but they were no call/no show.

It felt wonderful to know that we have friends and family here and that we could all be together and feel at home away from home. And John and I truly love to feed people, and we were thankful for the opportunity to do just that.

Everyone raved about the food. There was lots of everything left over. Most of us were too stuffed for dessert, but for the people who had room, I brought out pumpkin squares with whipped cream and they were very well received. No one had room for cupcakes!

After dinner, we took turns washing dishes. Everyone stuck around because we still had beer to get through. Check out our mini keg: 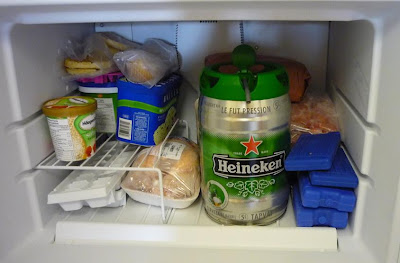 John wants to make it a Thanksgiving tradition of course!

We sat around with full bellies and played a board game that Allan brought, and then we watched Gladiator which was on TV. Everyone left with a tray of turkey cupcakes and I put together a little snack pack for Mark's fiancee Alisha, since she couldn't make it because she had to work.

It was a fabulous first Thanksgiving in Toronto! Lots of food and lots of friends and I hope to do it again next year!

Sadly it only lasted a day though, and on Sunday I was back to studying. My week was kind of a write off, but John had a productive week. I told him to take a few days to relax, but he just jumped straight into job interviews. I think he had at least three last week and he has another one tomorrow. I'm not sure whether any of those will pan out or not, one was definitely a bust (another one where he got there and found out the job was not as described). But I think there's value just in getting out there and checking out the different types of businesses if for no other reason than to get a feel for what kind of environment you want to work in and what's available.

I really don't want him to rush into any old job just because it's there. This city is big enough and there are so many opportunities here that I know there's a good fit for him out there and it will come along when the time is right. I hope that he is able to find a job for himself as good as the job he helped me find, and I believe he will.

This weekend was really quiet. Mainly studying, and we finally got the curtains up. I had to shorten the curtains from the old apartment, but on the bright side I have enough fabric left over to make pillow covers and curtain ties, although I didn't have time to make them this weekend.

I made some cupcakes to bring to work tomorrow. Cherry cupcakes with almond frosting, one of my favorites. Hopefully they like them! And I found some time yesterday to bake some bread. It's my second batch since we moved here. Slowly we are getting all of our routines back!

So all is well here, I'm just really busy. I'll be studying all this week as well and then my exam is next Monday. I think that if I keep working as hard as I have been, I'll be just fine.
Posted by Jacki at 6:11 PM