Yay! The bank called me to day to let me know that I have a job! I have to go in tomorrow to pick up my text books so that I can start studying before my training starts on Thursday. Apparently there are so many of them that the recommend I bring a "sturdy backpack".

So that is good news. And I'm actually genuinely excited to be going back to work. I'm looking forward to this job. I haven't felt this way since I've been unemployed, like I actually want to go back to work. But I feel like this is going to be a really good thing.

The weekend was pretty quiet. It rained Friday night so we didn't end up playing capture the flag. On Saturday we headed down to the St. Lawrence Farmer's market (this time it was open!). We got all kinds of produce, some gorgeous baby back ribs and a pork shoulder. I also picked up a bottle of cherry extract (I had never seen this before!) that I think will be great in frosting. We had lunch there. I had a delicious crepe stuffed with chicken, greens, scallions and hoisin sauce and John had a gigantic sandwich.

We headed back home via Chinatown because I wanted to go hunting for mooncakes. Sadly, however, everywhere we went was sold out as it was the last day of the mooncake festival. Next year I will have to go earlier!

But it wasn't a total waste because we found a fruit stand selling pomegranates 5 for $1. Can you believe that? Twenty cents for a pomegranate! When we got home, I removed all of the seeds while we watched Gladiator on TV. It took ages, but now we have an amazing hoard of pomegranate seeds and it only cost us a dollar.

We were tired from all of the walking, so we stayed home that night. On Sunday, John made raspberry waffles for breakfast. They were to die for!

We only left the apartment once all day, to hit up the grocery store for a few things to make dinner. We cooked up half of the ribs using this recipe from the show Chuck's Day Off. What an amazing way to cook ribs! The short version is that they're seared and then oven braised for 2.5 hours. The long version is a list of a zillion different flavors that are all combined to make the best ribs I've ever tasted. Here's a picture of it before we put it in the oven to braise: 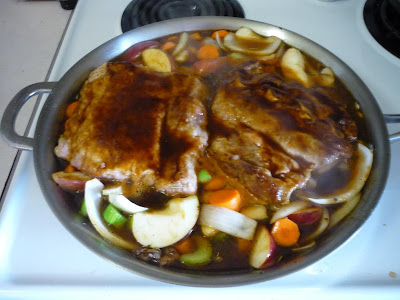 Oh yes, those are apple slices that you see!

We also boiled up some of the corn we got at the market. It was probably the best corn I have ever tasted. And we panko breaded and fried some tomato slices, but they didn't turn out as good as I'd hoped.

And that was the weekend. Just lots of food and relaxation. Works for me!

I also applied for school this weekend, so my application is in for Fall of 2010. Nice and early this time. I hit a bit of a snag though, in that they don't want to transfer over my transcripts to my new application. I spoke to someone today who eventually said her supervisor would transfer it over sometime in the next few days. So I'll keep an eye on it. Hopefully everything will be fine.
Posted by Jacki at 11:01 AM