Somehow I Managed To Do It Again!

When I lived in Halifax, I had the sweetest deal going. I had a sweet, downtown apartment which was connected to lots of stores and my work via pedway. I could stay inside all winter if I wanted to (although I love playing in the snow too much to actually do that). No time was wasted commuting, life was perfect.

It was hard to give up. But I wanted to come to Toronto so badly that I was willing to settle. I was willing to commute to work up to an hour each way and to live in a tiny place if it kept the rent low.

But my amazing boyfriend found me an amazing apartment in heart of where I want to be. It's attached to more shops than were in Scotia Square Mall and they're even closer than the pedway was! The apartment itself is a little bigger than our old one. All my stuff actually fits in the kitchen. Everything is perfect.

So I wasn't expecting to luck out any more than that.

But of course, this is John we're talking about.

Knowing I was looking for work, he would send me job postings to apply for every single day. And one of those happened to be at the bank where I've been interviewing all week.

Well, they offered me the job! (Pending credit, criminal and reference checks of course). From what I can tell, the job is going to be something I enjoy doing, in a positive work environment, for more money than I used to make. And the entrance to my building is quite literally six steps from my door to the outside. Unbelievable. Not even across the street, or through a pedway, or two doors down. Just take the elevator to the bottom floor, head outside, six steps and you're there.

Now before you think I am completely spoiled, I must concede that I will be spending the first two months in training which is half a block away.

Life is good. And I am so grateful to have John's love and support as I work through this whole not-going-to-school thing and put together my plan B.

So I guess my point is that it was easier than I expected to build a life in Toronto better than the one I had in Halifax (minus friends and family of course) and in such a short time. I start on October 8th.

And my other point is that I think all of my friends and family should join me here in Toronto because it's great :)


Allan and Judy left this afternoon. We had a great two days with them. We didn't go out much, just to karaoke on Wednesday and puttered around the shops on Thursday. But I got to do lots of cooking. My chili on Wednesday turned out great (it's the first time I've ever made it) and last night I made some potato and leek soup and some chicken drumsticks. And Allan made an apple pie! I was thrilled because I never make pie and it was a particularly delicious pie.

So I think John and I are going to take it easy tonight and just enjoy being home alone. He hasn't yet revealed to me the plans for the weekend.


I also want to share with you my latest favorite thing. Konad Nail Stamping! I even took a picture of the manicure I did today, just for you guys! 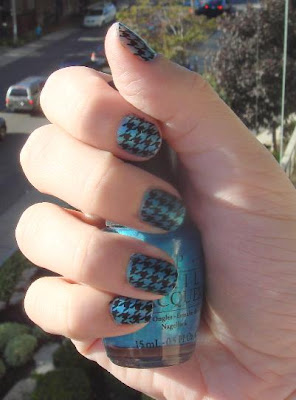 Houndstooth! How hilarious is that? I honestly burst out laughing every time I look at my nails. It's so easy to do too, you just stamp it on your nails and then clean up the edges. I'm a big fan of things that look impressive but are super simple. I've been painting my nails every two days since I got this stuff because it's so fun.
Posted by Jacki at 2:25 PM