John turned 32 this weekend! And it was the first time since January that he had a whole weekend off! He's back to working Monday to Friday again, so life is good.

On Saturday, our keys from AutoShare arrived so we decided to go for a drive. I needed some baking stuff, so John offered to take me out to Michaels in Mississauga. We Googled mapped it: 26 minute drive. Ok. So we booked a car for three hours thinking that would give us plenty of time.

This was my first time leaving the city by car since we moved here and I didn't expect to be so nervous. My stomach was knots though on the highways. I'm not sure if it's because I'm not used to being in cars anymore or if it's just that Toronto highways are so intimidating (or probably a combination of both) but I got pretty squirrelly.

It took half an hour just to get out of downtown, and when we got on the highway, there was an accident, so we had to find an alternate route. The end result is that we got totally lost and by the time we got to Michaels, about two hours had passed so we only had about ten minutes before it was time to go home.

I quickly ran through and picked up some new icing colours, some large cakeboards for the cakes I'm making for his work and a really cool kit that I can use to make fancy fondant letters.

On the way home we got lost again. I think we went too far East. After 20 minutes of wandering through midtown trying to find our little corner, we finally got our bearings back and pulled into the parking lot at 4:01, one minute late.

The next person to use the car was waiting there. She said she had just called AutoShare and was on hold waiting to report that the car wasn't there, so we got there just in the nick of time (the fees for returning a car late are pretty substantial)

So that was our first drive out of the big city!

We stopped for Chinese food on the way home (Manchu Wok, blech!) and had a lazy rest of the afternoon. At night we watched the fights (Silva, your fight against Maia completely destroyed any fleeting hope I might have had that you would someday return to your former glory of being the top pound for pound fighter in the UFC.) and had snacks. It was a good day.

On Sunday it was John's birthday so I made him a special breakfast of eggs, bacon and pancakes shaped to say "32" (and there may have been a heart shaped one too. Maybe.) In the afternoon we went to see Clash of the Titans. I really liked it! I wish it had been longer though.

After the movie we went out for dinner. John had requested fajitas for his birthday supper so we headed over to the Pickle Barrel. We split a pound of half chicken, half steak fajitas, they were so good! 2 oz cocktails were $6.99 so I ordered a peach bellini that ended up being as big as my head. It was yummy though.

And when we got home it was time for birthday cake! Check it out: 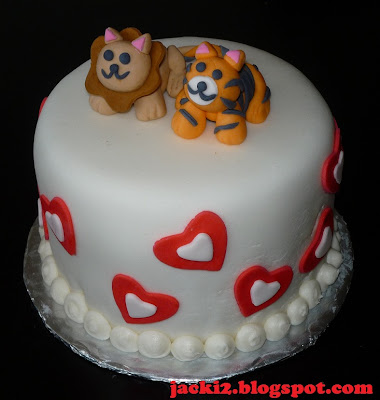 John had requested fruit flavoured cake so I made him a triple layer blueberry cake with strawberry filling. It's covered with a thin layer of vanilla-almond buttercream and a layer of marshmallow fondant. I used my 6" pan but somehow the cake still turned out huge and really heavy!

On top I put some happy cats that I had made in advance. They're fondant too. And you can't tell from this photo, but their tails are linked in the back. When I brought it out, John burst out laughing, so I think it was a success. And it was absolutely delicious. For flavour, it was one of my best cakes yet! There's still a tonne of it left though, I don't know how we're ever going to eat it all.

All in all, we had a fun weekend. And I took this Friday off for my birthday, so it's just a four day week!
Posted by Jacki at 8:20 AM