I Made A Quilt!

Quilting is something I've always wanted to try, but I've always been intimidated by it. It seems like there is so much to know before you can even attempt such a big project. And it's so important to get it right the first time because of all of the work that's involved. You don't want to spend months sewing tiny stitches only to have it not turn out at the end! And come on, we're talking about a family heirloom here if it's done right. That's a lot of pressure!

But how do you connect the pieces? How does it all stay together? Where do you get the pattern? But most daunting for me was the question: How do you select the fabric? And from there, a million other questions: What kind of fabric is best? What is the filler? How much do I need? How do I pick the colours?

So for the longest time, I didn't even know where to start.

When John and I got home after Christmas, we went out to do some Boxing Day shopping. We had some gift cards from Chapters so we went to the bookstore next door which is where I found a book called Leslie Linsley's New Weekend Quilts in the bargain bin for $6. I figured it couldn't hurt.

Reading the book, I learned all kinds of shortcuts to make quilting about as much work as knitting a pair of socks. I learned how to cut out squares ten at a time and triangles 20 at a time. I learned that by sewing two strips of fabric together lengthwise and then cutting them into strips crosswise, I could cut down the number of seams I needed to sew to built my quilt squares by half. And I learned how to assemble the whole thing when I was done.

Not only that, the book had all kinds of patterns, each with a list of exactly what fabrics you would need to complete them. A few searches on the internet to answer a couple of questions I had and I was feeling confident that I could actually pull this off.

Which makes me wonder of course: How did anyone ever do this without mega bookstores and the internet? Nannie, where did you learn to quilt?

So with my new found confidence, I headed to the fabric store. I decided to do a really simple pattern for my first try. Four colours, three solid and one patterned. Black and three shades of purple: light, medium and dark. Should be easy, right?

It was. Black broadcloth was $4/meter and the medium purple jumped out at me immediately. I found a dark purple to complement it right away. Finding a light patterned fabric to match it was a little trickier, but I eventually saw a white printed cotton batik (looks sort of like tye dye but without being tacky) with light purple swirls through it. It was gorgeous and matched perfectly. Two meters of filler, a few spools of thread and I was good to go! Everything came to $70 after tax, the most expensive craft I've done in a long, long time. I had better not screw this up!

John had bought me a huge cutting mat for Christmas. It was such a thoughtful gift and it made cutting out the pieces with my rotary cutter a breeze. I think I was done cutting in under two hours. Sewing the pieces together took maybe another day or two and that's only because I'm neurotic about pressing every seam open after I sew it. I don't think my iron ever saw so much use or felt so needed before. It was really fun to watch it come together: first squares, then strips of squares, then connect the strips and add a border to the outside.

The tricky part was putting it together, and this was the part that made me question why quilting is a hobby mainly associated with old women. It was hard work! And if I can still do this when I am an old woman, I will be very happy.

First I had to move all my furniture around until I had enough floor space to lay it out flat. I laid out the black backing fabric and taped it to the floor so it wouldn't move. On top of that, I laid the filler (also called batting). Then on top of that went the quilt. So it was like a quilt sandwich. Then I crawled around on the floor, hand sewing basting stitches starting in the center of the quilt and working outwards in a star pattern so that I could move the thing but still have it stay together. That took the better part of an evening.

The next day I started the actual quilting! (You mean all the work up to this point wasn't quilting? Nope.) I had a bit of an internal debate as to whether I should quilt it by hand the traditional way, or by machine which I wasn't even sure my ancient sewing machine could handle.

Well, my laziness and my desire to see this thing finished won out and I decided to do it by machine. I quilted around the borders and then a basic checkerboard pattern through the middle. I had originally intended to do more than that but when it was done the quilt felt very stable and I didn't think additional stitching would really add to the aesthetic.

The last step was to sew the edges together and I was done!!

All in all it took just over a week. I really just couldn't put it down once I started. I'm thrilled with how it turned out and because I preshrunk all of the fabric and used polyester batting, it should be completely washer and dryer safe. Yay!

Here are some pictures. I don't think they show the true vibrancy of the colours and you can't really see the pattern on the lighter fabric, but it should at least give you an idea of what it looks like.

This is the quilt draped over the closet doors. It's really big! I think it might be big enough to cover a double bed. 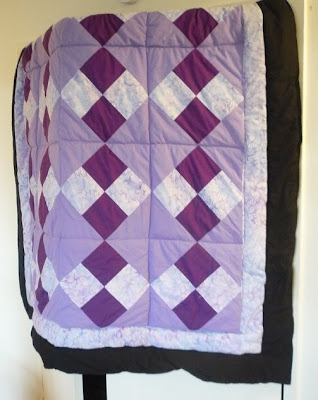 And here is a close-up of the individual squares. I was really impressed by how flat the seams lay. Even up close it looks so flat that the different colours could be printed on rather than pieced together. 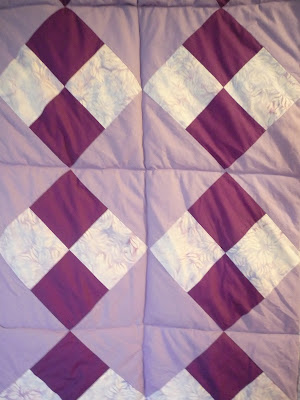 And here is a picture of the back so that you can see the actually quilting. 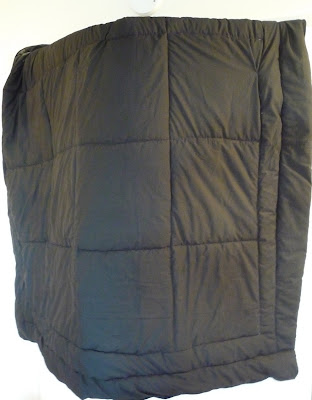 Overall, I thing I did a great job with it but I think one is enough for one winter. Maybe next winter I'll make another one that is more intricate. Only time will tell! Right now it lives on the back of my couch. It's super warm and cozy!
Posted by Jacki at 7:09 AM