An Evening with Friends and Eating for Cheap

For the first time in four weeks, I got to actually leave my apartment this weekend! No studying!

I got off work at 6:00pm on Friday and we headed straight over to Marc and Alisha's place over on St. Clair West. It was the first time we've been over there since Marc was back in Toronto, and they were having us over for dinner.

Alisha is a wonderful cook. She made baked and breaded chicken breasts stuffed with cheese, garlic and onions and topped with raspberry sauce, mashed sweet potatoes with walnuts and steamed asparagus with pecans. It was so delicious and there was so much food I almost couldn't finish it all. I brought some cupcakes leftover from the ones I made for work, although no one had room for them until much later in the evening.

After dinner, Marc made lychee martinis for Alisha and I, the boys found some beer and we had a nice evening just hanging out, chatting and getting caught up . We had such a nice time that we decided we should do dinner together more often, maybe a couple of times a month.

One of the nice things about Toronto is that the transit runs really late, so you don't have to feel like Cinderella, running home before the clock strikes twelve. I think we left around 12:30 or 1:00 and went straight to bed when we got home.

We slept in late on Saturday and dawdled away the morning. John made egg sandwiches and I played some Pikmin on the Wii. We spent most of the afternoon going for a walk up north towards Lawrence street.

The weather was nice and warm so we didn't need coats. John somehow knew about some parks up there so we went exploring. We found some paths and even a couple of streams. We found one park that was sort of nature-y wilderness and one that was neatly manicured with cement walkways. The leaves on the trees are almost finished turning so it was just beautiful. The ground was completely covered with layers of fallen leaves. We saw lots of people out walking their dogs and that made us want one (although that's obviously not practical while we're in a one bedroom apartment). It felt as rural as anywhere in Dartmouth, it was hard to believe we were in the heart of Toronto. After a few hours, we were getting tired so we stopped into a little market for some ginger beer and came back home.

We didn't end up going out for Halloween. There were a few parties going on but I don't think either of us was really feeling like getting dressed up. Instead, we stayed in and ate hot beef sandwiches and watched the original Dracula. I quite enjoyed it, although I must say vampires have come a long way since then.

The clocks fell back an hour last night so although we slept in a bit this morning, technically we were up bright and early according to the clocks.

We needed groceries but we decided that rather than hit up the Metro, we would venture out into the city in search of better prices. We did amazingly well I think.

The first stop was Dufferin station where we hit up Wal-Mart for discount Halloween candy. It was pretty picked over, but we did pick up some sour peaches and swedish berries for 91 cents a bag. From there we headed across the street to La Tortillarie where you can get homemade corn tortillas that they make fresh daily for $1.75 per half kilo. We use them to make amazing tacos, or enchiladas, nacho chips, etc. John also picked up a can of hominy because he saw a recipe for hominy soup that he wants to try. I think it's a some kind of bean, but I'm not actually sure.

Next we hit up Chinatown. The first stop was the Ding Dong bakery where we went a little overboard. I can't help it though, I love it so much! We got barbecue pork buns, barbecue pork pastries, wintermelon pastries, egg tarts, coconut and red bean mochi, something called Japanese pumpkin cake that looks like a Swiss roll, and two pizza style buns that we ate while we shopped. Their mochi is so incredibly fresh and sticky that it's almost impossible to peel off the wrapper. It's so good, I think they actually use coconut milk in the mochi itself. Eighteen items and everything came to less than $12, taxes in. Ridiculous.

We walked past a Chinese herb shop so I popped in and found blooming tea balls that were 3/$2. Usually I see these for $2.50 each so I picked up a couple. They're basically loose tea leaves that are shaped into a ball and they bloom into a flower when you put them in the hot water.

The big splurge of the day was when we found a shop that makes homemade dumplings. They had a huge list of combinations but I just stuck with my favorite, pork and Chinese cabbage. $10 for 3 dozen, but the truth is, it would cost me $8 or $9 to make a batch of about 60 dumplings from scratch and it takes two hours, so it was worth the price to me.

So when all was said and done, we ended up with all of this: 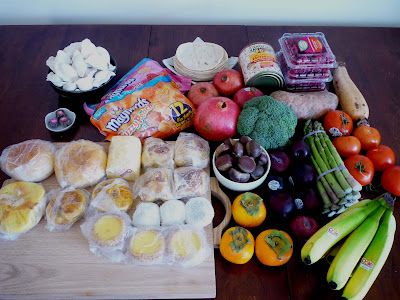 Not bad I think.

We have some whole chickens in the freezer, so I think we're going to thaw one of those out and pick up some ground beef and we'll be set for the week! I think I'm actually going to pack bento lunches this week since we have all the stuff for them.

I'm so in love with the fact that you can get homemade, quality foods for such low prices if you know where to look. And I know we're only going to find more great places to shop the longer we live here.

And in other news, any of you who remember Michelle Chouinard will be happy to hear that she had her baby. Joseph Pierre Ferguson was born healthy into the world on October 26th. Congratulations Michelle!
Posted by Jacki at 1:06 PM